Slightly Mad Concepts of Early Aviation
As the old saying goes: “If at first you don’t succeed, try try again.” But there’s also the saying: “The line between genius and insanity is a fine one.” In aeronautics, the success of early pioneers like Clement Ader, Alexander Feodorovich Mozhaiski, Gustave Whitehead, and — of course — those bicycle mechanics from Ohio seems to have been a combination of both trying repeatedly and being a bit nuts. 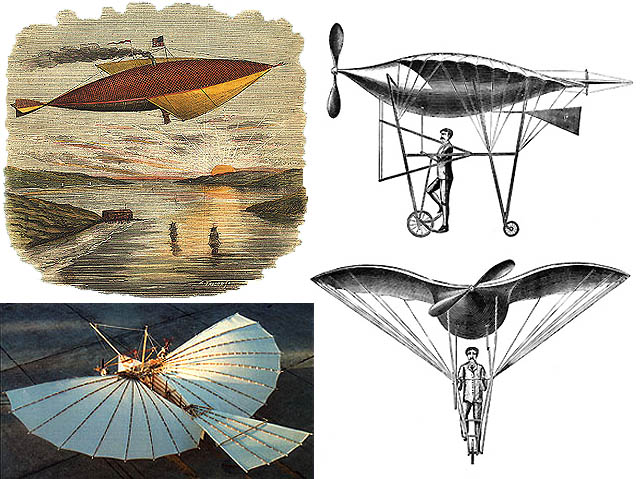 Top Left: Steam airship by Frederick Marriott – Avitor Hermes, Jr. 1869. Right: a bird-like machine by Alexandre Goupil. Bottom Left: Whitehead’s Albatross-type Aeroplane, 1905 – Images via
Those who kind of, sort of, just barely got themselves into the air… sometimes not at all
We remember Ader, Mozhaiski, Whitehead, and the Wright Brothers because they did what they sought out to do, with varying degrees of victory: get themselves into the air. Alas, there is a wide world of people who kind of, sort of, just barely did the same, sometimes not at all. But certainly not for a lack of trying. 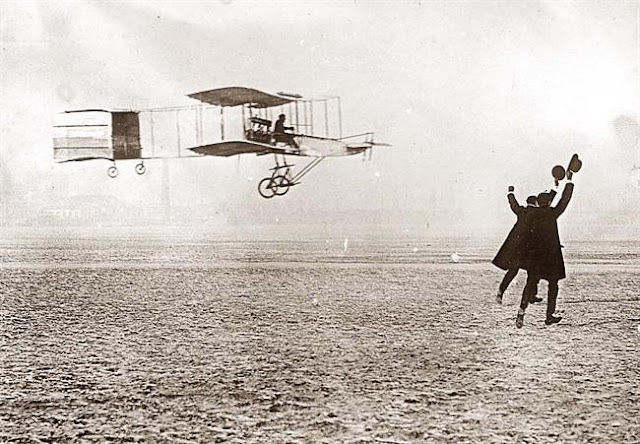 Photograph of Voisin flight, similar to the Wright Brothers historic flight
What actually counts as flying is a matter of debate. The Wrights took their bows for the first heavier-than-air controlled flight, but there were a lot of other inventors who flew without any control. For instance:
In 1848, John Stringfellow flew a short distance in a steam-powered craft — wowing the crowds at London’s Crystal Palace: 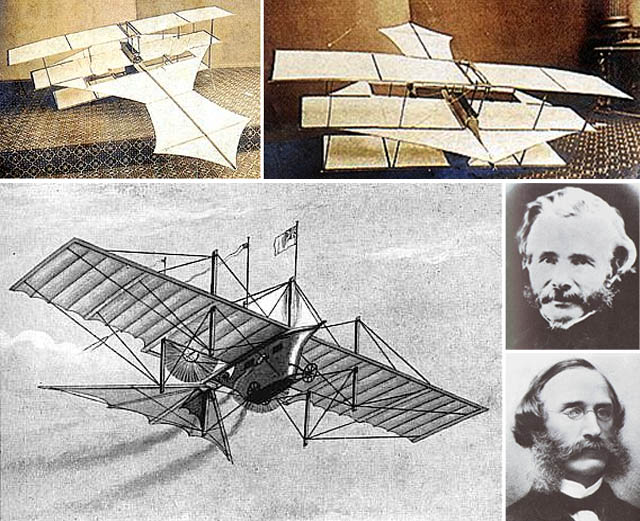 Also shown – Stringfellow and Henson’s airliner, images via 1, 2
Want to fly steam-powered, propeller-driven bat-wing airplanes? Some of them were as big as a moderate-size airliner… 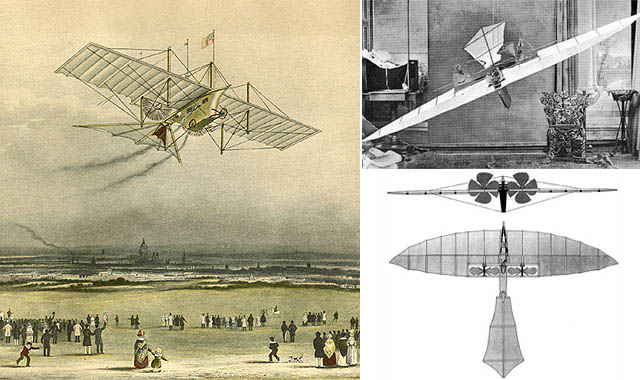 (images via)
Jean-Marie Le Bris is credited as flying higher than where he lifted off by using the very terrestrial power source of a horse to pull his elegant glider into the air. This was in 1856. 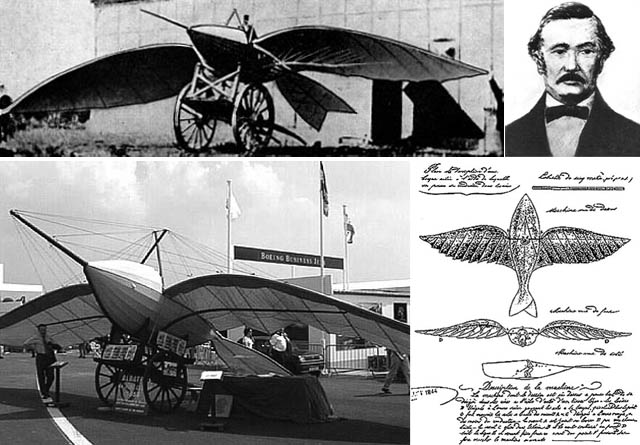 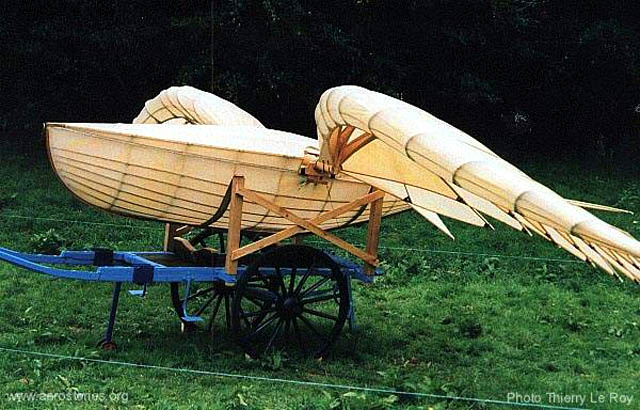 (photo by Thierry Le Roy)
I’d like to see this thing fly again
The afore-mentioned Clement Ader made his way into the record by taking his Avion III more than 30 feet in 1897 — but that he did is a matter of some debate. Here is his steam-powered, propeller-driven bat-wing airplane, the Eole: 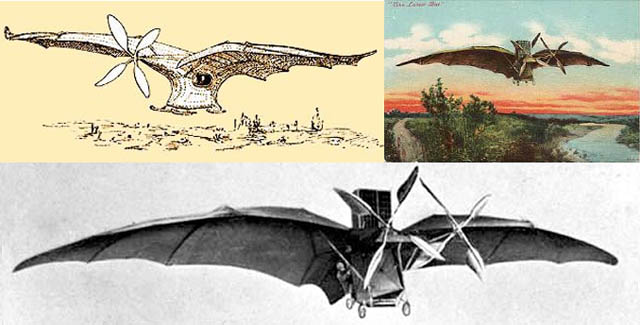 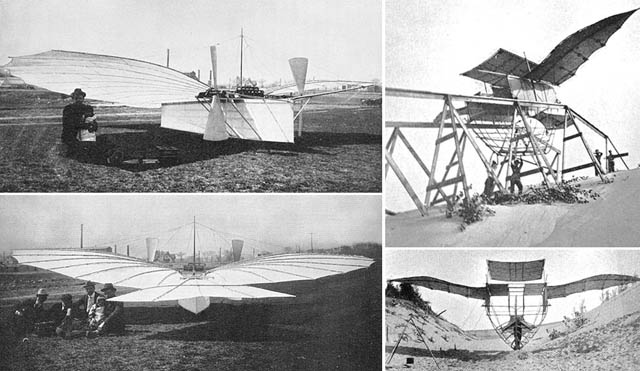 Left: Gustave Whitehead’s 1901 model; Right: William Paul Butusov machine, images via
You may be tempted to dismiss these efforts as “The Wrong Stuff”, or “The Flying Follies”, but they all served to progress aviation further toward a powered flight, and they are, after all, gloriously unique: 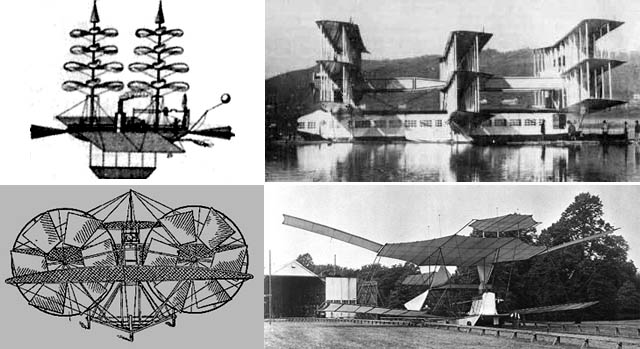 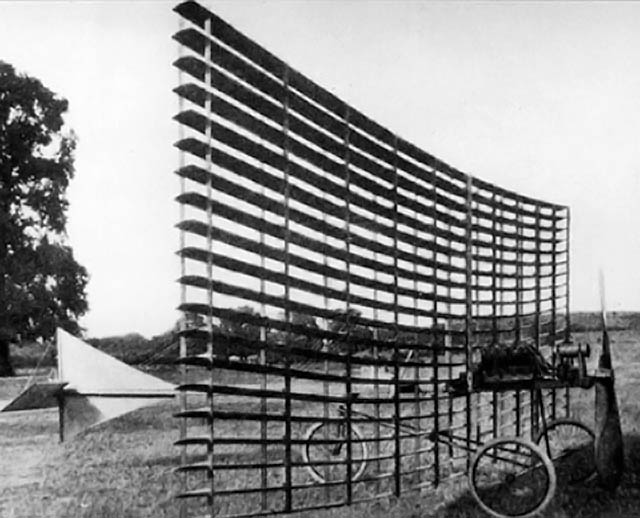 (image credit: National Air and Space Museum)
Alphonse Penaud envisioned in 1871 a monoplane (closest to the modern forms) with retractable landing gear and a glass-enclosed cockpit. It was never built. 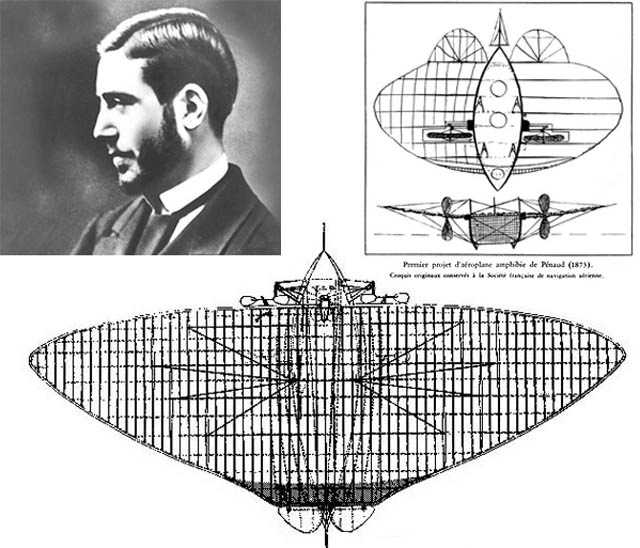 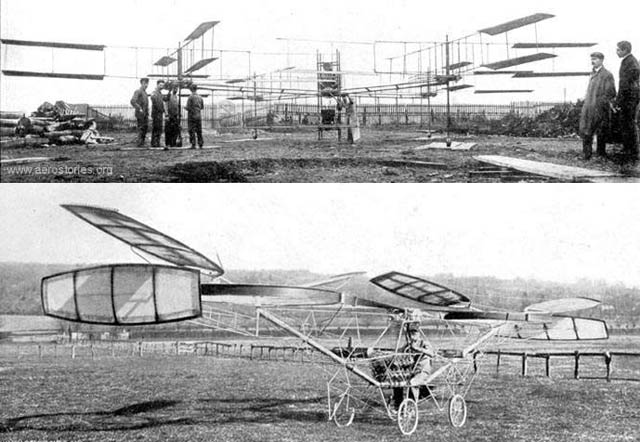 Top: Louis Breguet’s Giant Gyroplane; Bottom: Paul Corny machine (both from 1907) – Images via
Gianni Caproni built the “Ca.60 Transaero” in 1921. “The fuselage was a giant boat, it had eight wings (with an area of 9,000 feet), eight engines, and the whole looked like something cooked up at Disneyland… It weighed in at 55,000 pounds. It flew once, from Lake Maggiore.” (source) 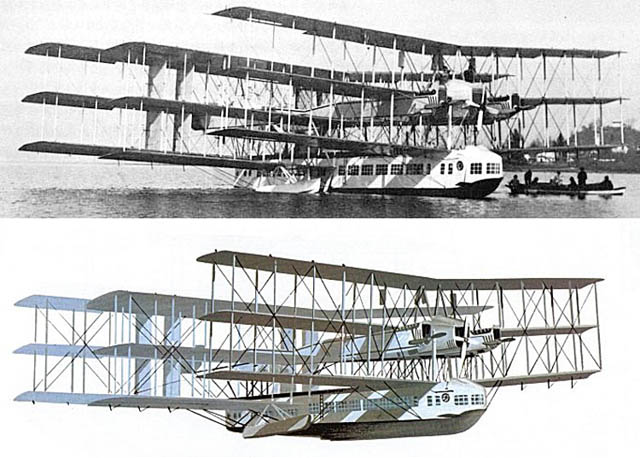 “After reaching an altitude of 60 feet the flying houseboat took a nosedive and broke up when it hit the water.”
“It is a Caproni CA60 Noviplano (the 6 wing flying houseboat. 8 engines with a total of 3,000 hp and 750 sq.m of wing area, capable of holding 100 passengers. Engineer Gianni Caproni was a genius and a true aviation pioneer. He had other 138 creations and was granted over 100 patents” (source) 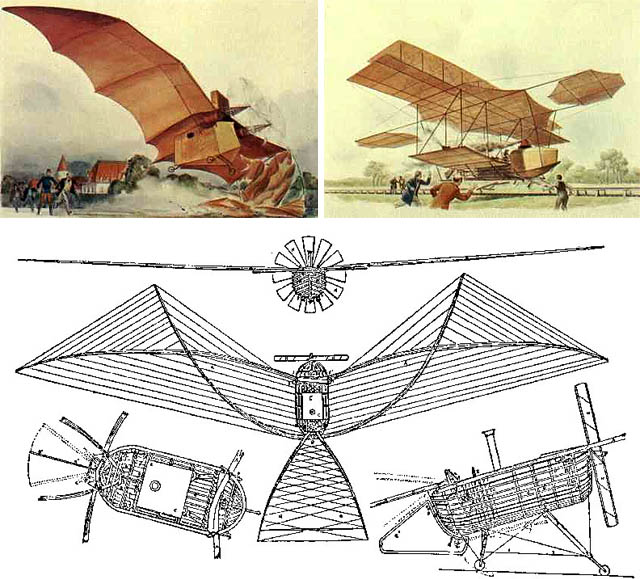 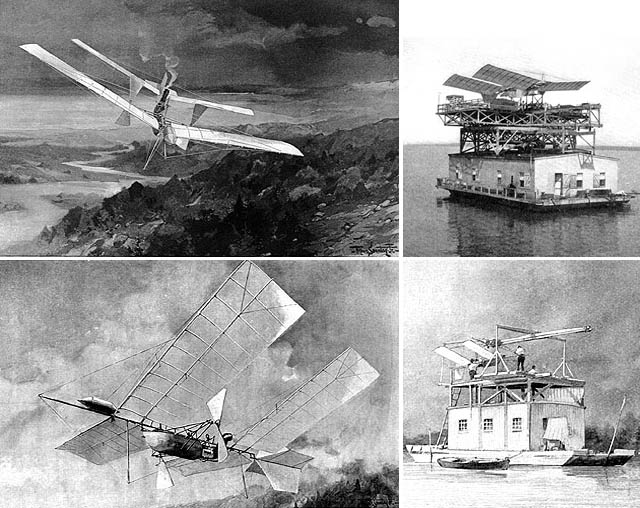 (image credit: flyingmachines)
Otto Lilienthal (1848-1896) – one of the most famous pioneers of aviation – built gliders and biplanes, and crashed to his death when one of the wings broke in flight. His Flying Machine (see patent here) looks so beautiful, with proud lines…. He used to say: “To invent an airplane is nothing. To build one is something. But to fly is everything.”. 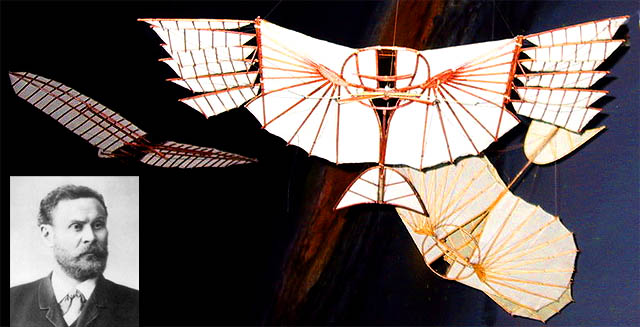 (images via)
Flying on a kite and a prayer
But then there’s one special person who not only tried and tried again but who also skated very near that edge separating brilliant and nuts: the man who flew without power, without much control, and heavier than air. 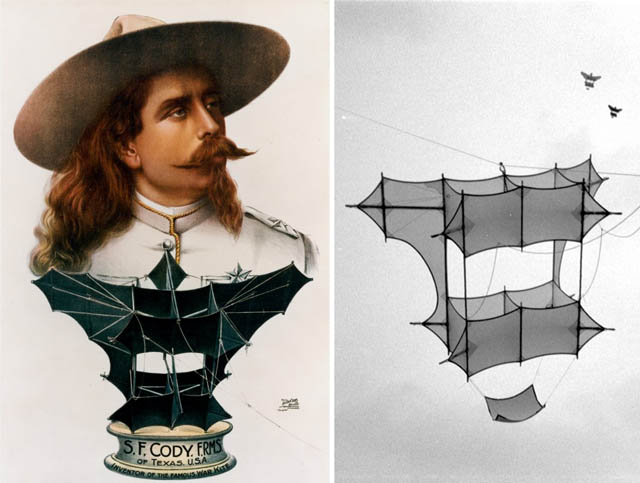 (images credit: cody-kites)
Ladies and gentlemen, and children of all ages, I give you the flamboyant, the amazing, the possibly crazy Samuel Franklin Cody! 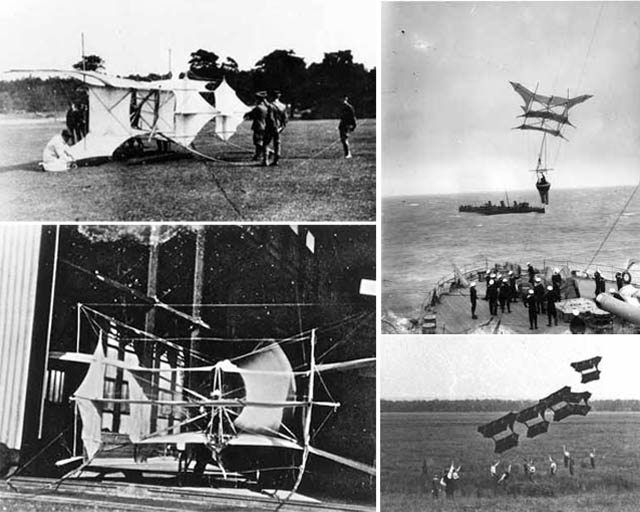 (images credit: cody-kites)
What Cody flew isn’t all that new, but his showmanship and dedication to his own unique way of defying gravity certainly is. The Chinese, after all, had been putting men into the skies with kites for a long time (just read Sun Tzu’s The Art of War), but Cody was a human-kite flying zealot.
Cody — who took his moniker from that other great showman Buffalo Bill Cody — went from a music hall and wild west show star to the sky when he became fascinated by the idea of using human-carrying kites in all kinds of unique and imaginative ways.

Cody’s kite in the 1893s and 75 later, flown on Scheveningen beach (kites built by Nick Morse)
Determined not to just talk a good game, Cody used his natural flamboyance to drive the point home. Around the turn of the century, he crossed the English channel in a kite, though it was towed by a boat the whole way. In 1906 Cody was tasked by the British Army to develop his kites for military uses and soon was using his designs to set world records such as getting a kite to an incredible 1,600 feet. So impressed were the Brits with Cody’s kites, they used them successfully during the first world war to spy on the Germans — until airplanes became more reliable and Cody’s kites were shelved.

Not to be undone, Cody mixed power and, leaving the ground, and his tow-rope, behind. In 1908 he created his imaginatively named British Army Aeroplane No. 1 and successfully flew it an impressive 1,390 feet, which, according to some, was the first heavier than air flight in Britain.
I see Imperial TIE Fighter somewhere in the lines of these kites
An unknown Cody kite design, spotted by researchers here: 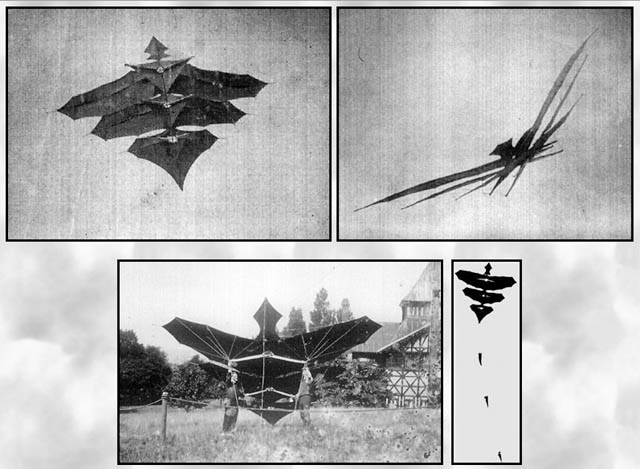 Cody went on to become a real legend in the early days of flight (watch a video about him here), winning the Michelin Cup in 1910 and a military flying contest one year later. In a perfect capper to his larger-than-life career with kites and then planes, Cody met his end at the controls of one of his machines (a unique seaplane) in 1913.
Ornithopters (that could make birds fall from the sky with envy)
George R. White (see patent) and Canadian inventor Doug Froebe kept building these feathered things well into the 1930s: 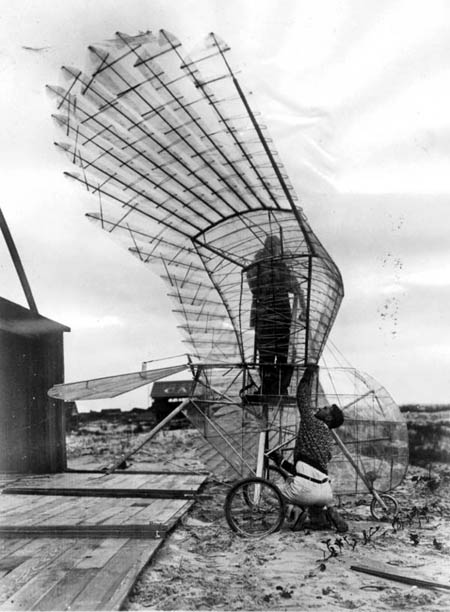 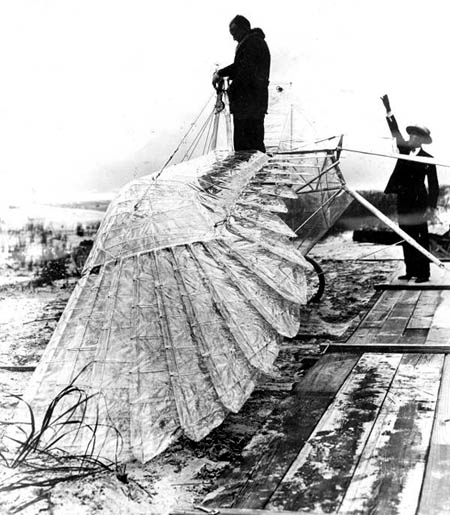 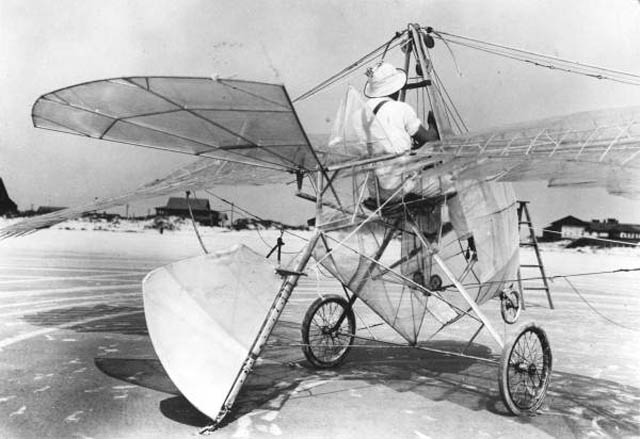 And we finish with bizarre and truly strange “Quadrotor” concepts – somewhere between a plane and a helicopter, which deserves to be investifgated further – more info is appreciated. 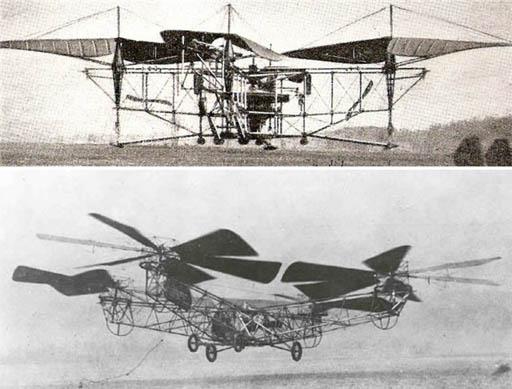